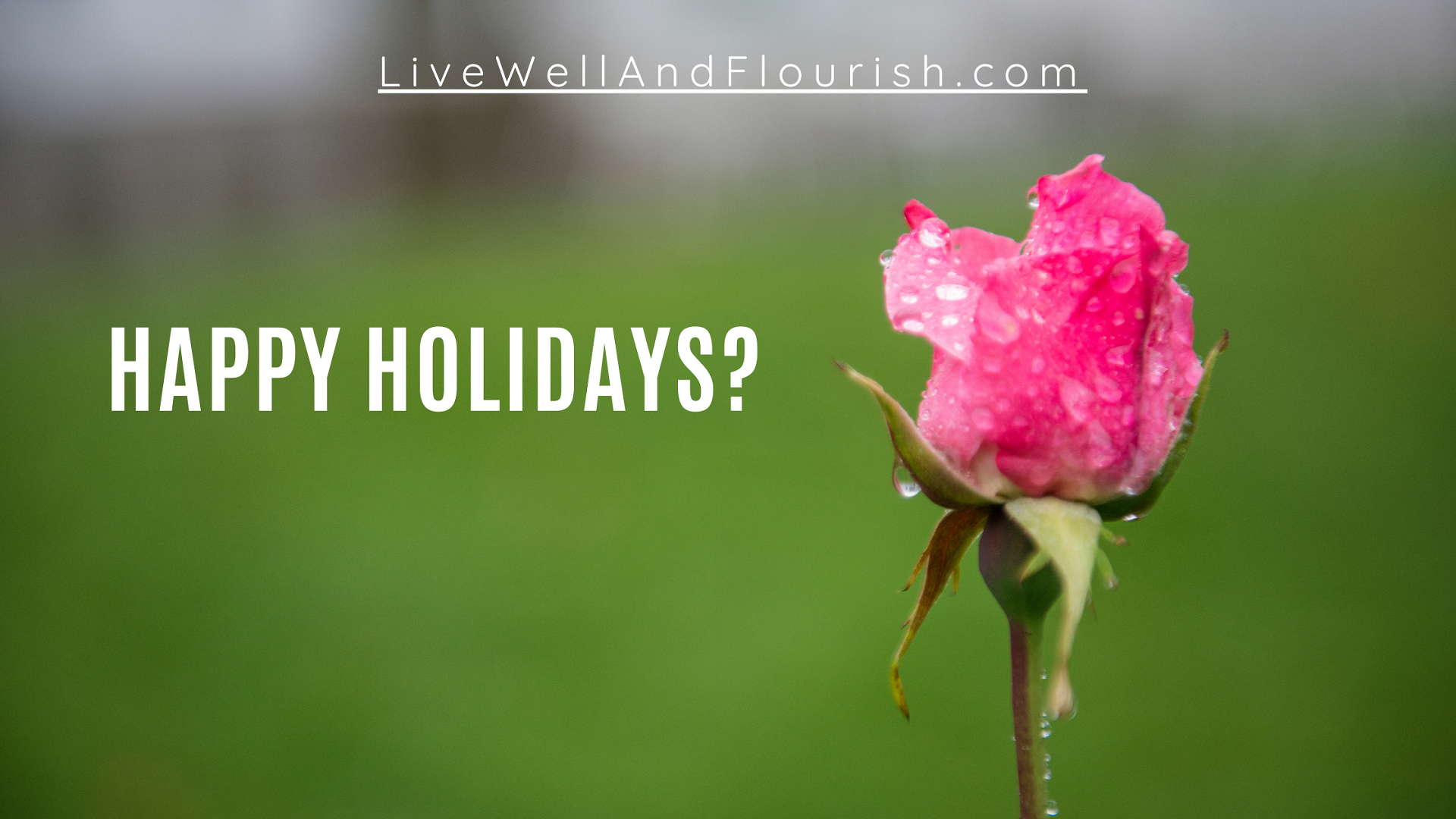 In this article I talk about the very real phenomenon of the holiday blues and offer some suggestions about how you can cope with feelings of loneliness and depression around the holidays.

Well, it's the holiday season. Christmas and Hanukkah are just around the corner. For many people the holidays are a time for great joy - seeing family and old friends, trips back home, renewing family traditions and reviving pleasant memories. This is true for many, but not for all. For a lot of folks, holidays bring reminders of loss, loneliness and depression. It's sad, but it's true. 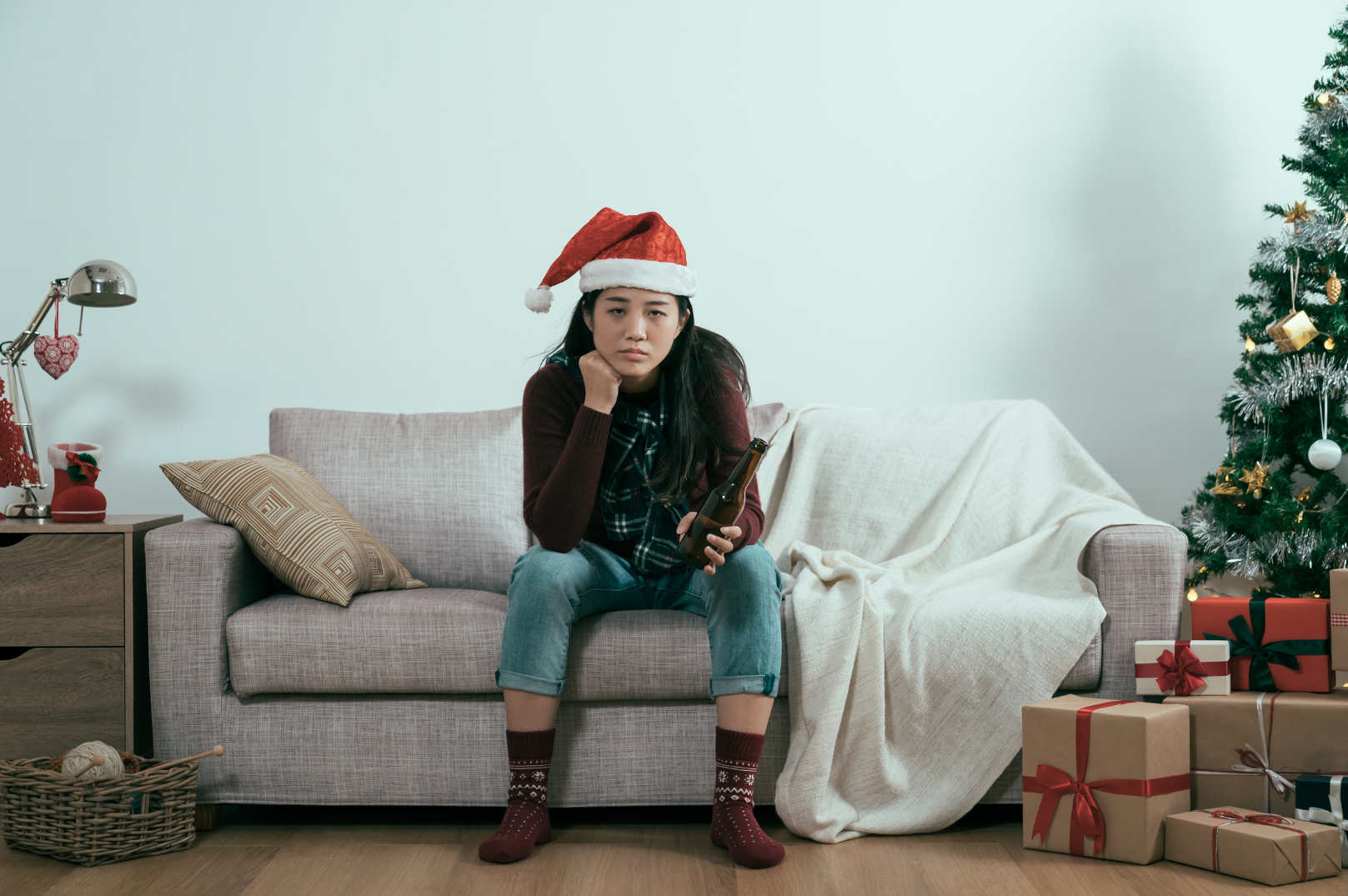 Recently, I've been fighting some of these feelings myself. I’m not a melancholy sort. Generally, I’m pretty upbeat and optimistic and when I get into a funk, it doesn’t last long. But in the last few years, I lost my younger brother on Christmas Eve and last year, my Mother right before Thanksgiving. When my brother passed, I had to call Mom and tell her that her youngest son had died unexpectedly. (We had been waiting for him to arrive at our annual Christmas Eve dinner and he was uncharacteristically late, and we couldn’t get him by phone or by text, so my older brother and I drove about 90 minutes to my younger brother's condo. We couldn't get in and after calling the police to get into the condo, we learned he had died in the night. It was a bad scene, despite my family’s general stoic tendencies.) And so now I have a couple of not so pleasant memories that are associated with the holidays.

I share this tale to illustrate how for some, holidays are connected with bad memories and experiences. By the way, I’m not depressed or anything of the sort. So don’t worry about me. But many people do get sad around the holidays. Blue Christmas isn’t just an Elvis song (I think it was Elvis), holiday depression is a real thing.

What if you’re not feeling so jolly?

So, what can you do if you’re not feeling so jolly during the holidays? First, and maybe most importantly, is to realize that there’s nothing wrong with you; you’re not some weirdo for feeling bad during the holidays. When it seems like everyone around you is happy and excited and you’re feeling down, it’s easy to fall into the trap of thinking that there’s something fundamentally wrong with you. There isn’t. You’re not alone in your feelings. My guess is that many of the people around you are hiding some sadness behind a happy facade. You’re most assuredly not the only one feeling down and your feelings ARE your feelings … they’re completely valid.

Depression isn’t the only form of holiday blues. It’s also common and for many of us natural to feel a little lonely during the holidays, especially if you’re not able to be with friends and family, and sometimes even if you are. Even outside the holidays, social isolation can lead to all sorts of bad things including loss of sleep, reduced physical activity (yeah, really), increased stress, increased depression and even an increased chance of a stroke or heart attack. All of this gets amplified during the holidays since we often associate the holidays with being around friends and family. By the way, working from home doesn’t help with this. My own research shows that social isolation can have negative effects on teleworkers and students taking online classes. My point in bringing this up is to, once again, tell you that your feelings of social isolation around the holidays are pretty common and pretty reasonable. Again, you’re not the only one. 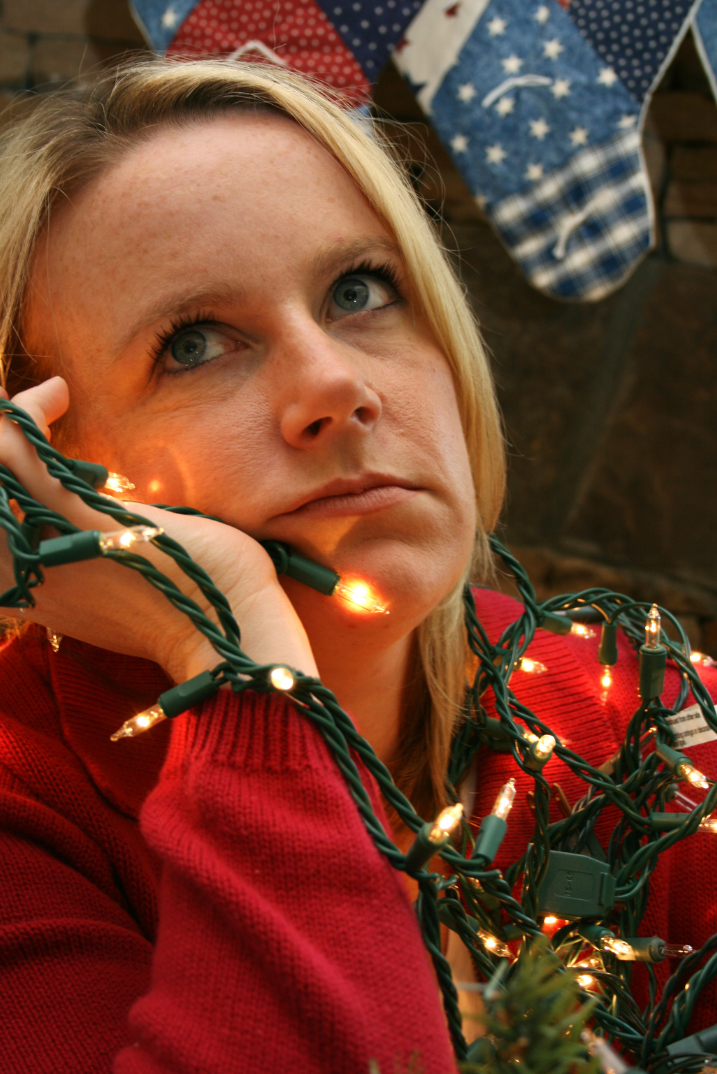 All of the commercial activity around the holidays doesn’t help the situation. It’s pretty hard to escape ads on television and social media, holiday specials, decorations and Christmas lights, holiday music playing incessantly in stores and offices - it’s all pretty in-your-face. Even SiriusXM has insisted on putting the Country Christmas channel or something like that on my favorites list; I didn’t put it there. So, it’s pretty easy to get the false impression that your sadness or loneliness is an isolated case. Trust me, it isn’t. According to the National Alliance on Mental Illness, 64% of people report being affected by holiday blues. Not only are you not alone, according to this report, you’re in the majority!

Look, it seems pretty natural to get a little bummed out around the holidays, especially now. We’re living in strange, uncertain times: a seemingly never-ending pandemic, a threat of nuclear war (I kind of thought that was over with, but apparently not), inflation and other economic uncertainties - it seems reasonable to be concerned. And it’s not hard for that concern to morph into anxiety and depression. Throw the holidays on top of this and feeling down isn’t surprising.

When you start feeling down during the holidays, it’s critical to guard against a building cycle of depression. The cycle goes something like this. You feel bad when it seems that everyone around you is happy, so you feel bad about feeling bad, which makes you feel even worse and so on. Avoid this cycle. Do not deny your feelings, they’re perfectly valid, and don’t get down on yourself for feeling down. There’s nothing wrong with you; as the 64% statistic I mentioned earlier indicates, despite how it seems, you’re actually in the majority.

OK, so what can you do if you have the holiday blues? As you might imagine I’ve been pondering some things that might help. But before getting to those, I want to make a little announcement. I’m going to take December off. I have some travel coming up and also need to recharge my psychic batteries a little, so I’m not going to release anything in December, but I’ll be back on track in January with a new release the first week of the year. In the meantime, you can check out the back catalog of articles at livewellandflourish.com/blog . 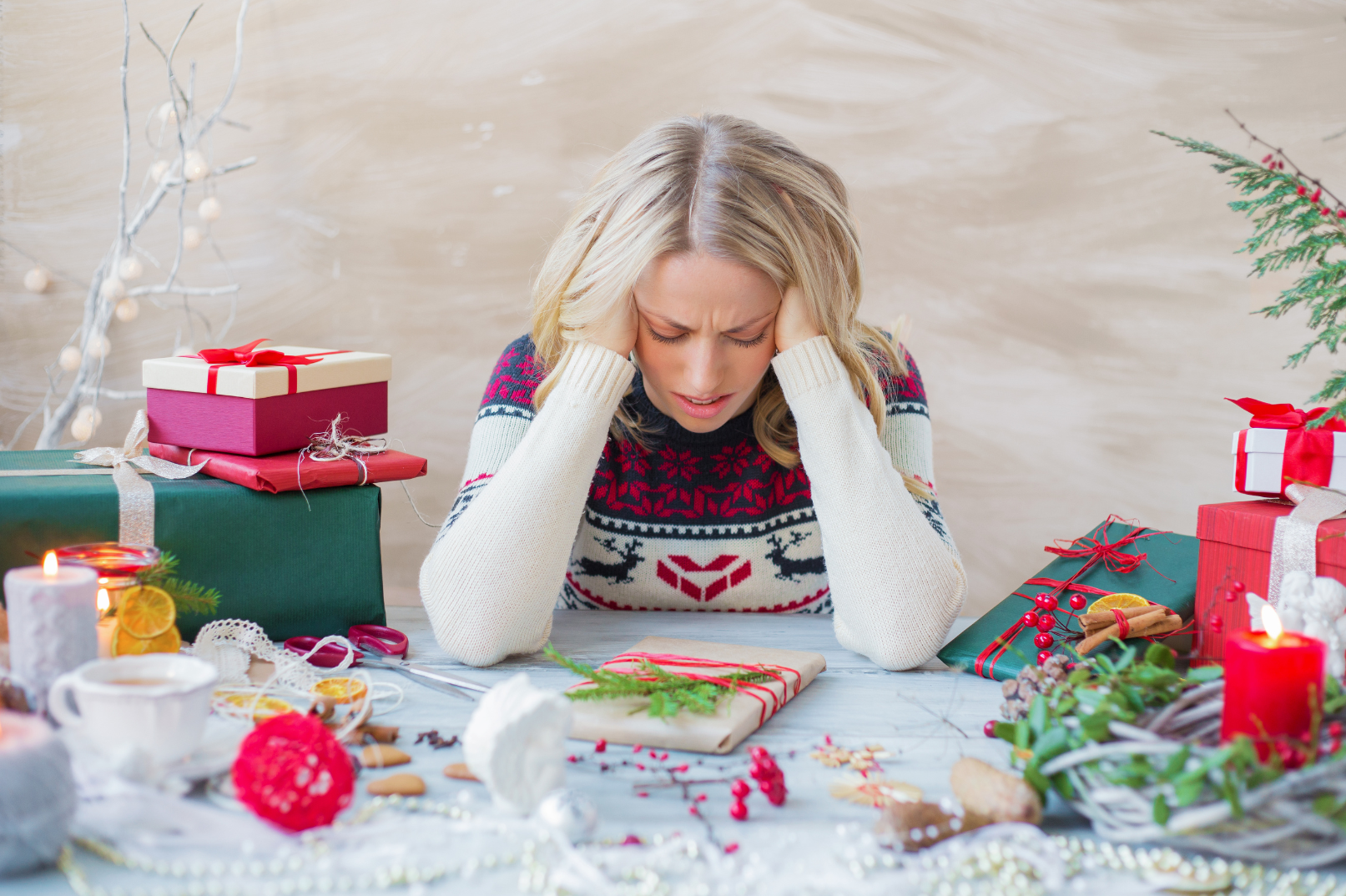 Alright, here are not three, but FOUR things you can do to help cope with the holiday blues. The fourth one is a little holiday gift from me to you.

My first suggestion is to help yourself by helping others. As I’ve said repeatedly, you’re not alone in your feelings. Also, even if you don’t realize it or it doesn't seem like it, you’re better off than a lot of people. So, maybe you can reduce your feelings of isolation, loneliness and sadness by helping others. There are all kinds of volunteer opportunities, especially around the holidays. Check some out. Find one where you can serve yourself while serving others. Serve food at a kitchen, visit a senior home or center, help out with gift wrapping, whatever you like. Try a few of these out and you’ll almost certainly find something that clicks with you. Then, consider making volunteering a new holiday tradition. This is especially helpful if some of your memories of holiday traditions are less than ideal. You can help push those into the background by building new traditions and memories. Also consider contacting old friends, they might be lonely as well. Even if they aren’t, it’s almost always nice to reconnect.

My second suggestion is to moderate the drinking, overeating, and partying. The drinking can be especially harmful around the holidays. Many of us have tried to drink away the blues at some point in our lives. I know I have. It never works. Alcohol is a depressant despite its initial pleasant buzz. There’s nothing wrong with a drink or two, but excessive drinking is harmful both physically and mentally, so do your best to avoid overindulging. Overeating and partying too much can also be a problem, if for no other reason than leading to a lack of restful sleep, which is counterproductive when you’re fighting negative emotions. 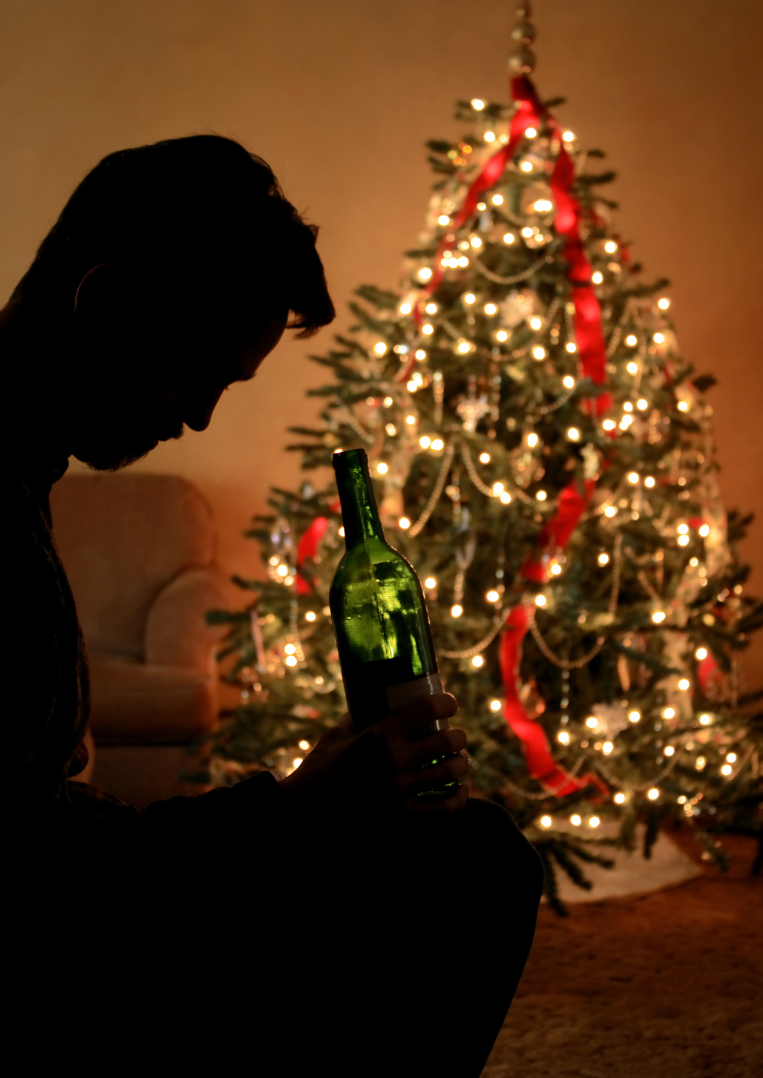 Also, remember that you’re not alone in your feelings. Yeah, I know, I know … I’ve said this a bunch of times already. But I repeat this because it’s important. Thinking that you’re the only one feeling down around the holidays just makes everything worse. So, remember that 64% figure, which, by the way, is probably an underestimate due to social desirability bias, which is the tendency to answer survey questions in a way that you think is socially desirable.

Alright, here’s my bonus. If you’re feeling depressed, lonely, or otherwise blue, get some help. Seeking help when you need it is a sign of strength, not of weakness. If you have insurance, it probably covers counseling. If you don’t, there are free services available. If you’re in the United States, you can call or text 988 from your mobile phone to be connected with counseling and mental health referrals, or you can visit mentalhealth.gov. Even talking things over with a friend can be immensely helpful. If you don’t have anyone to talk to, you can contact me. I’ll talk to you. You can email me at livewellandflourish@pm.me . Or you can just go to livewellandflourish.com and click on “Contact Craig”, it's up towards the top of the page. There's a little form you can fill out. Now, I’m not a counselor or mental health professional or anything like that, but I can be a sympathetic ear.

Before closing, I want to take a moment to thank you. Putting this out is an important way for me to serve my purpose: helping others flourish. It’s good to know that I’m not talking into a void, and I very much appreciate you taking the time to listen.

Let’s wrap up this episode and Live Well and Flourish for 2022 with one of my favorite quotes, and yes, I know I’ve used it before (at least I think I have). It’s from Marcus Aurelius. “When you arise in the morning, think of what a privilege it is to be alive, to think, to enjoy, to love.” Remember, no matter how lonely you feel, there are people out in the world that care about you … I do.

Some information on the holiday blues: 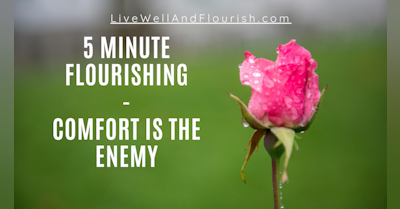 Comfort Is The Enemy

An article explaining why sometimes we should try to go beyond our comfort zone to try new things and flourish in life. 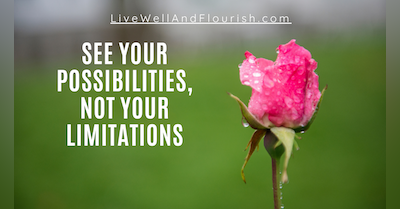 See Your Possibilities, Not Your Limitations

An article explaining the benefits on focusing on the possibilities of your life, instead of being limited by your constraints.